Our amazing designer Robert Roberts at Saucebox Finery overhauled the design for this iteration to stay true to our Tech roots and school colors while keeping our trademark pinstripes. These kits will stay Forever Bold in White and Gold, and look great with any pair of generic black bibs you might have lying around, but if you want to look pro, you gotta matchy matchy. Luckily we  have a full compliment of accessories to help you out. Printed on Hincapie Velocity line, these are sure to fit fantastically and will last for plenty of seasons to come.

Store shows generic Hincapie pieces. Click on each to go to page to see proofs.

ORDER CLOSES SUNDAY, SEPTEMBER 15TH. So hurry up. It shouldn’t take long for you to decide, because these kits are FLY. 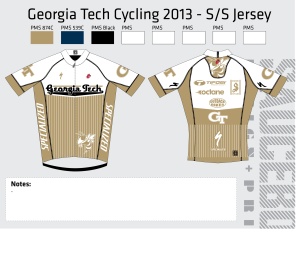 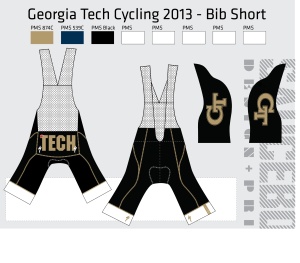 The site has been on hiatus for a bit, but hopefully you’ve been able to keep up with our updates through facebook and the google group (for you teammates, current and former).

It seems that we’ve been doing so much that we’ve barely had time to stop and write it down.

Here’s a rundown of our accomplishments this semester:

This weekend we are headed out to the very first, inaugural, preliminary Winter Bike League ride in Athens, GA (DON’T EVEN THINK ABOUT IT). The Winter Bike League, commonly referred to as “WBL” in some circles, is one of the greatest group rides in Georgia, bar none. It’s organized, it’s fun, it’s long and it’s got prizes. What’s not to like? It goes from the first weekend in December to the last in February; every time using a different route. This weekend, Saturday the 1st, will be an 80 mile “jaunt” around Hoschton and back to Athens (map). It’s a great time with some great people on some awesome country roads. Get yourself a taste of the real Georgia. Check out their website here (WARNING: Do not click if you have epilepsy).