Come join us in room 240 of the CRC at 7:30pm on August 30th and September 6th for our interest meetings for the fall semester. We will talk about team rides for the semester, benefits of joining the team, and the MTB race season this semester! If you have any questions, feel free to reach out.

We’ve updated the flyer for our road race! Over concerns about the number of police needed to run the event we have shortened the road race circuit (note: this marginally affects the distances) and changed the time trial to an out and back. Please see the flyer linked below.

This past weekend the team made the seven hour trek up to Raleigh, NC for the Rogue State RR and Criterium race weekend. This race weekend is a dual conference event, hosted in the ACCCC with riders from the SECCC attending for conference points. Being so far away and taking place during midterms, we took a smaller squad of seven riders to the event:

The road race featured gusty cross winds and mild climbs, with an 11 mile circuit culminating with a gradual climb to the finish line. Juan Barraza, fresh off of a collapsed lung from the Swamp Classic, stayed with the peloton for a pack finish in the collegiate men’s C field. Miriam Blaine had an unfortunate start to her race, with a crash taking her out of contention on the first lap of the collegiate women’s C. Despite breaking a shift lever in half and ripping four spokes from her wheel, Miriam patched herself and her bike back up and continued to ride over the weekend. In the collegiate men’s B race, our breakaway rider Carlos Fernandez held the field off solo for two full laps, giving the sprinters John Beckner and Jake Smith a free ride until he was caught with one lap to go. Poor positioning kept us from getting the W, but Jake Smith took 3rd and John Beckner took 4th. John Graves rolled in with the peloton for a pack finish. In the collegiate men’s A race, Jake Holt bridged to a solo move on the second lap and worked with what would eventually become a seven man breakaway. Despite attacking the break repeatedly and dwindling it down to six, Jake Holt was unable to break clear and rolled in to a 6th place in the sprint.

The criterium featured a gradual climb with a swooping decent and some sketchy pavement. Miriam Blaine and Juan Barraza held their own in their fields and took pack finishes. In the collegiate men’s B, Jake Smith stayed on the pointy end, bridging to breaks, responding to moves, and attacking on the last lap to go solo for the W! In the collegiate men’s A race, Jake Holt was dropped on the first lap, but managed to jump back in the group when they lapped him and stayed with the peloton for the rest of the race.

It was a great weekend and we’re stoked to have brought back our first win of the season!

We have moved our race weekend to Calhoun, GA for this year! Please share with friends. Looking forward to seeing you all there!

The alumni kit order site has been opened. Please note that some of the designs are still not up yet. We are going to try to have them up by 9/9/19. Also, we are not going to close the store until 9/23/19 (site currently says 9/16/19 is the close). Link to the store here. You need to make a Castelli account before ordering. Make sure to enter an address, otherwise the items will be sent to the team and not to you.
We will do a t-shirt and apparel order later in the month. 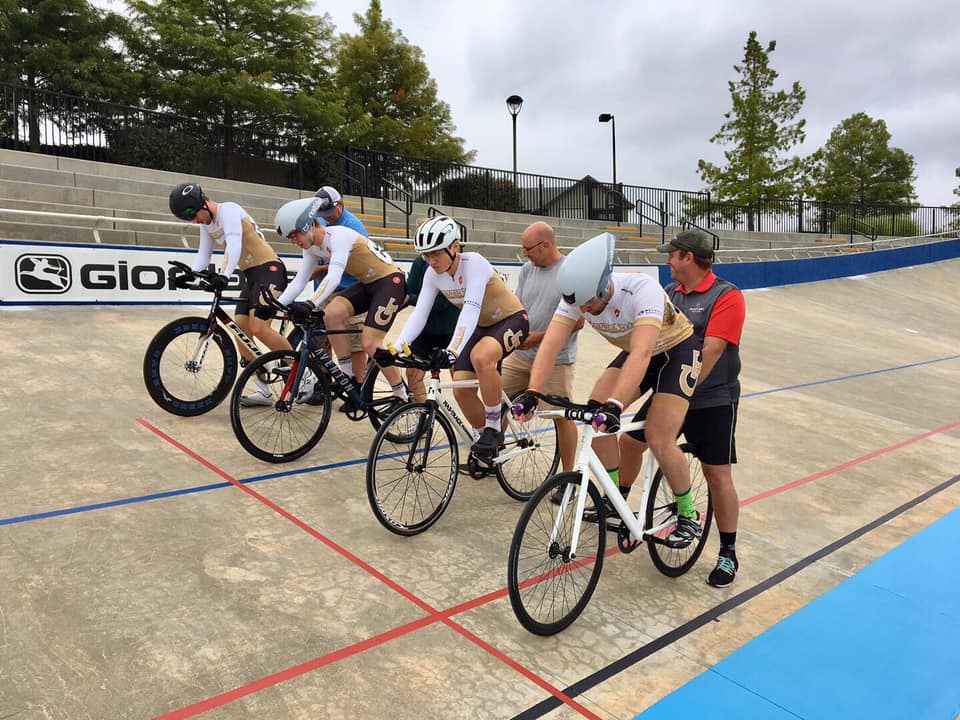 Riders (left to right): Carlos, John, Jake, and Jack.
Races done did: the team pursuit, Carlos did the individual pursuit, John did the match sprints and Kilo, Jack did the Kilo, and Jake, John, and Carlos all did the scratch race and the points race.

John impressively managed to take home 4th in the match sprints. We’re excited to come back in a couple weeks for nationals.

It’s happening again! The SECCC Track Cup returns this labor day. Make note of the beginner class and beginner race program! This is a great opportunity to get introduced to track racing at the Dick Lane Velodrome. Be sure to pre-reg on USAC to save time the day of! 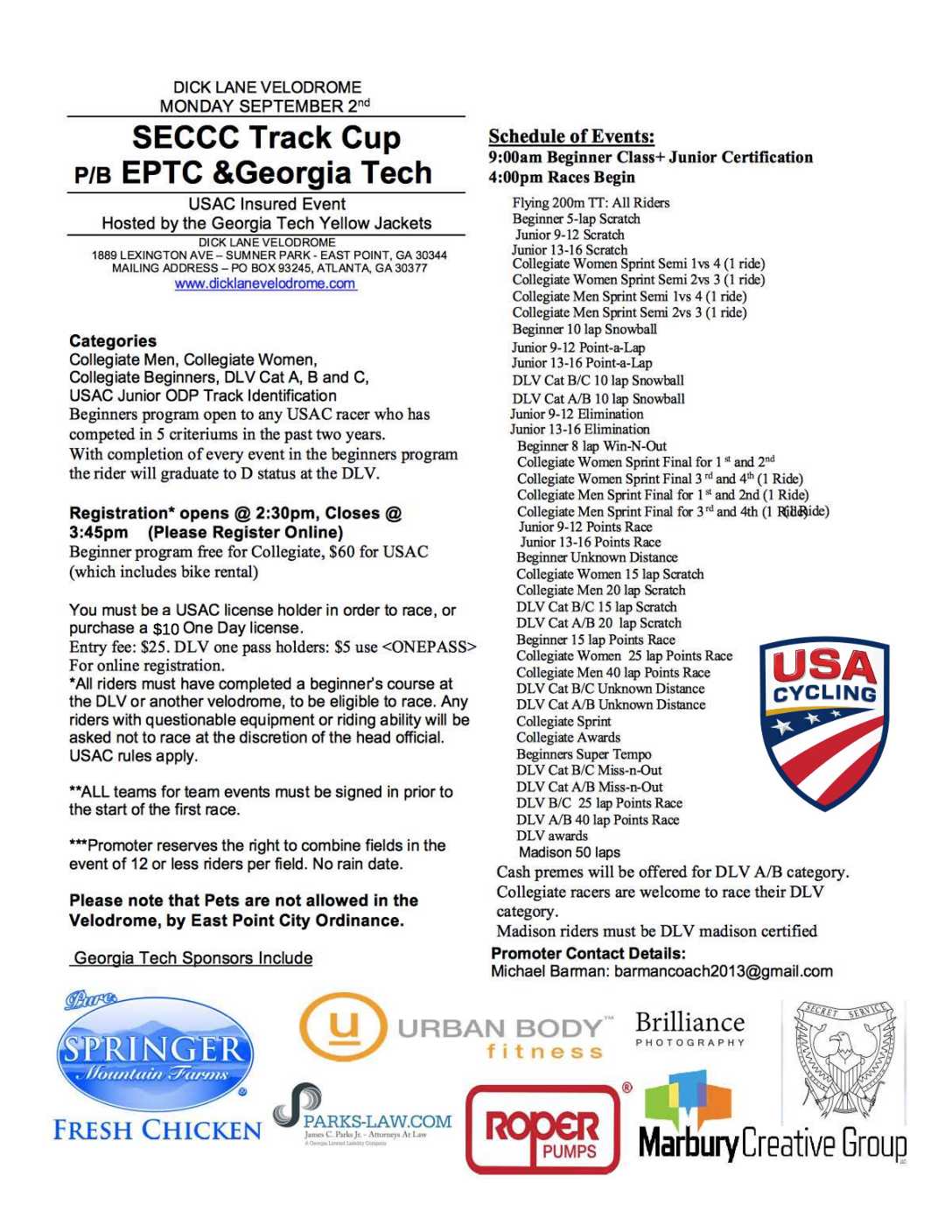 Deborah is our road VP for the 2019-2020 season. She joined the team after coming to Georgia Tech as a Civil Engineering and City Planning masters student.  This past road season she went from a category C to a category A and racked up a plenty of points in the SECCC Team Omnium for the club. As road VP she will be in charge of getting the team around the southeast during the road season, planning our winter team camp, and hosting our home road race weekend. 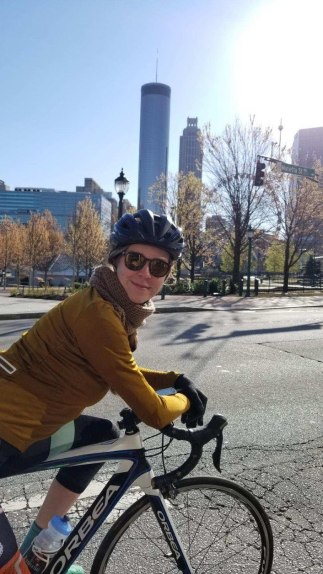 Deborah can be found riding road, mountain, cross, track, or dancing up hills on the way to class on her single speed.