We’ve updated the flyer for our road race! Over concerns about the number of police needed to run the event we have shortened the road race circuit (note: this marginally affects the distances) and changed the time trial to an out and back. Please see the flyer linked below.

This past weekend the team made the seven hour trek up to Raleigh, NC for the Rogue State RR and Criterium race weekend. This race weekend is a dual conference event, hosted in the ACCCC with riders from the SECCC attending for conference points. Being so far away and taking place during midterms, we took a smaller squad of seven riders to the event:

The road race featured gusty cross winds and mild climbs, with an 11 mile circuit culminating with a gradual climb to the finish line. Juan Barraza, fresh off of a collapsed lung from the Swamp Classic, stayed with the peloton for a pack finish in the collegiate men’s C field. Miriam Blaine had an unfortunate start to her race, with a crash taking her out of contention on the first lap of the collegiate women’s C. Despite breaking a shift lever in half and ripping four spokes from her wheel, Miriam patched herself and her bike back up and continued to ride over the weekend. In the collegiate men’s B race, our breakaway rider Carlos Fernandez held the field off solo for two full laps, giving the sprinters John Beckner and Jake Smith a free ride until he was caught with one lap to go. Poor positioning kept us from getting the W, but Jake Smith took 3rd and John Beckner took 4th. John Graves rolled in with the peloton for a pack finish. In the collegiate men’s A race, Jake Holt bridged to a solo move on the second lap and worked with what would eventually become a seven man breakaway. Despite attacking the break repeatedly and dwindling it down to six, Jake Holt was unable to break clear and rolled in to a 6th place in the sprint.

The criterium featured a gradual climb with a swooping decent and some sketchy pavement. Miriam Blaine and Juan Barraza held their own in their fields and took pack finishes. In the collegiate men’s B, Jake Smith stayed on the pointy end, bridging to breaks, responding to moves, and attacking on the last lap to go solo for the W! In the collegiate men’s A race, Jake Holt was dropped on the first lap, but managed to jump back in the group when they lapped him and stayed with the peloton for the rest of the race.

It was a great weekend and we’re stoked to have brought back our first win of the season!

We hosted our 3rd annual Historic Brooks Road Race this year in conjunction with Topview Sports. Unfortunately, the Tuck Criterium did not make a return because of a permitting issue. The Tucker community preferred a chili cook off to a bike race that keeps them from getting to the post office, which is fair and understandable. Thankfully, Tim from Topview stepped in and moved the criterium to Gwinnett Tech for us. We’re going to try hard to make the Tucker Criterium happen next year by working a little more closely with the city and the community.

Both days of racing went smoothly thanks to all of the volunteers we had come out, the officials, Coach Barman, and Topview’s team. Being our home race, we had almost a full squad line up both days, with riders racing in the D, C, and B categories. We also had a number of alumni come out to help volunteer! It was really neat to see some familiar faces.

Here’s a list of our top five finishes for the weekend: 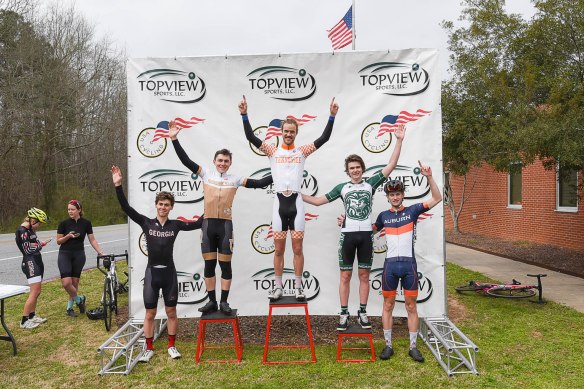 We’re stoked to announce that we have a new shop sponsor coming on for 2019! Secret Service Bicycle Repair is full service and offers: product orders, repairs, and custom wheel building.
For service inquiries, email: secretservice.bike@gmail.com

This past weekend, we took a full team of thirteen riders down to Gainseville, FL to race the Swamp Classic, hosted by Topview Sports. Last year, this race weekend was taken off the calendar, so we were all happy to see it’s return. Unfortunately, the iconic downtown criterium course did not make a return, but the speedway criterium course that replaced it proved to be plenty fun. Our riders competed in the collegiate road races, individual time trial, and collegiate criterium races.

We had a number of riders who could not leave until after 5pm Friday night. Since the rest of us did not like the idea of rolling up to the hotel in Gainesville at 11pm, we decided to leave the trailer behind and take separate, personal vehicles to the race. By midnight Friday, we had all made it to the hotel, a fantastically priced Super 8, without a hitch.

Saturday morning we were up bright and early at 5:30am. The first race of the day, the C/D’s field, went off at 7:30am, so we had to leave the hotel by 6:30am to get everyone to the race in time to pick up packets, pin numbers, and warm up. After mowing through the instant oatmeal packets, watery coffee, and waffle machine mix that made up the hotel’s complementary breakfast, we headed off to the race course.

Besides multiple crashes in the C/D field, the Georgia Tech riders made it through unscathed. Evan and Kyle went first and second from the D’s field and John took fourth from the C’s. Unfortunately, in the women’s field Deborah was not so lucky and got taken out in a nasty crash. Thankfully, she is doing well and was back on the bike by Monday of this week! Jake Holt took 4th in the B’s field. In the evening, Evan went first in the D’s time trials and Wes took fourth in the A’s. The following day, Kyle took fifth in the D’s criterium. In addition to the racing, we were stoked to meet up with Georgia Tech Cycling club alumni Benjamin Engwall and Hunter Brown. Benjamin was racing in the road race, time trial, and criterium, and Hunter came out to support the team on Sunday during the criteriums.

Check out the pictures that made it into a local news article here!

Our next race is coming up soon! We’re sending a smaller group to the Sumatanga Road Race in Alabama on February 16th. Our next collegiate race weekend is the following weekend at Auburn.

Team camp was a blast this year. We had a good group of Georgia Tech students and alumni show up for team photos and team time trial, individual time trial, and criterium practice.

We started the morning off by taking photos with our sponsor, Bob Hughes (Brilliance Photography), in the ground floor of the newly built school library. After photos wrapped up, we drove up to an industrial park in Marietta, where we met our road coach, Michael Barman. Being a Sunday morning, it was dead quite, and the open roads, with wide corners, were the perfect place for our newer riders to get comfortable leaning it over.

At noon, we broke for lunch and got ready for criterium practice. The Kennesaw State University cycling club showed up and threw down with us, as we worked on our cornering and pack finish skills. It was a great opportunity for the new riders on each team to meet each other and get comfortable riding elbow to elbow before the first race of the season kicks at University of Florida.

After camp, we’re feeling sharp and ready to race as we get ready to head down to University of Florida for the Swamp Classic this coming weekend. A big thank you to our road coach Michael Barman and Bob Hugh from Brilliance Photography for making the camp happen. Credit for the photos goes to team rider Eddie Nguyen.