Contrary to last weekend’s spectacular attendance by Georgia Tech at UF, only 4 GT riders were able to attend this weekend in Monticello for the Florida State cycling hosted Seminole Classic, but what lacked in numbers was surely made up for in points, with riders placing top 10 in both mass start races on Saturday and Sunday. 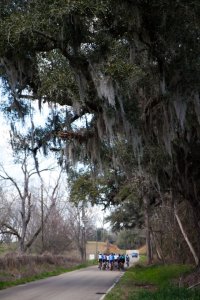 Somewhat backwards, Saturday began with individual and team time trials preceding the road races. The Spanish moss on the trees of northern Florida donated a serene feeling to the otherwise brutal racing that followed. Tech fared well in its TTT, keeping all 4 riders at the finish (results pending; come on SECCC!). The C’s road race began at 11 am, with Joshua Longenecker and Ben McAdoo representing Tech in the moderately sized field. For both the second race of their careers, they placed well in 6th and 8th place (respectively) in the final bunched sprint of the 28 mile race. The Men’s B field saw Sean Carroll and Christian DiCenso pulling hard throughout the 40 miles of their race. With individual breakaways out front at the end, the bunched sprint competed for 4th place, with DiCenso clinching 8th. 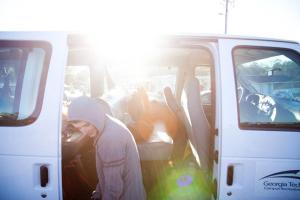 Sunday, to the disdain of everyone, awoke with a nipple hardening 28 degrees. The criterium ran clockwise around a fast and technical course in beautiful and quaint downtown Monticello and featured 4 characteristic turns: 1) wide sweeper through the central town roundabout 2) sharp right hander with an inside curb into a fast downhill 3) uphill right hander with bumpy asphalt buckling (good for getting some air) 4) slow and tight right hander into finishing straight. The cold however, was the most influential factor. Nearly half the field of the C’s race dropped out from the chill or from falling off the pack. Longenecker and McAdoo fought through the challenging conditions, scoffing at those who had given in. Longenecker had a fantastic race, finishing 2nd to a Kings College rider after pulling hard in a small breakaway in the final lap. Warming, the Men’s B race was underway. For 45 minutes, the group remained mostly bunched, with only one to three man breakaways that were caught by the group. Lees-McRae attacked hard and often however, and on the final lap, their man was able to hold a small gap for first. DiCenso sprinted in front of the group, nabbing 4th out of a cold, snot-faced and tired field. 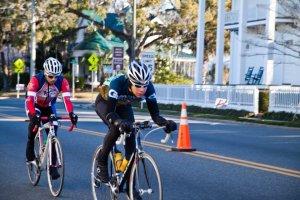 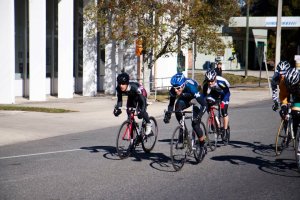 See more photos from the weekend at Joshua Longenecker Photography and the GT Cycling Facebook page.